This page is for general Casa Grande city government reporting by Harold Kitching, continuing what he did at the Casa Grande Dispatch for 11 years before he resigned.

At first glance, it seems good news that Casa Grande’s income from its retail sales tax has increased by 12 percent from five years ago.

The bad news is that income from construction sales tax has plummeted by 79 percent during the same time, a victim of the housing, construction and financial bust.

You’ll find all of the figures for construction, retails sales and other sales taxing categories on pages 110 and 111 of the 168-page Comprehensive Annual Financial Report for the fiscal year that ended last June 30. The two pages are also reproduced in the Gallery section of this website.

The report was outlined to the City Council during its Feb. 4 meeting and is available in full on the city’s website at http://www.casagrandeaz.gov/web/guest/cafr.

For a city heavily dependent upon sales taxes (at 37 percent of its revenue), the loss of the construction taxes forces even more reliance on the retail trade tax income.

To rub some salt into the wound, it was pointed out that when the city builds projects it also pays construction sales tax.

“So over the past couple of years, many of our projects helped support us from going even further in the hole,” City Manager Jim Thompson told the council.

The picture today is not yet clear.

Thompson said sales tax, mostly in retail, is running about 4 percent behind for the 2013 fiscal year that began July 1, but the impact of Christmas shopping is not yet known because the state, which collects all of the taxes, doesn’t issue reports until two months after collections.

“We’ll see,” he said. “The mall was crowded, other stores in town were crowded, it seemed to be a lot going on in the community, so hopefully those numbers are good. We just don’t know at this point in time.

“Next month’s state report will give us a really good indicator of how the Christmas shopping was, and that’s usually our best time of the year in Casa Grande.”

Mayor Bob Jackson said that running behind about 4 percent is sales tax collection is “kind of counter to what you read going on statewide; that really surprises me a little bit.”

Thompson said that in years when there is a presidential election, the sales tax income from winter visitors drops, “because with the winter visitors or other movements that occur, people either don’t travel or travel more. And with the economy the way it was, some people weren’t traveling as much or shopping as much for Christmas.”

From the murk of tedium, sparkling factoids rise

If you have the stamina of eyesight, brain passages and bladder to slog through page after page of city reports, you often run across sparkling little factoids that (kind of) make it all worthwhile.

That’s the case with the 168-page Casa Grande Comprehensive Annual Financial Report looking back at the fiscal year that ended June 30. (You can find it at http://www.casagrandeaz.gov/web/guest/cafr).

Inside, you’ll find that during the fiscal year:

✦ Casa Grande has 414 miles of streets, 5,340 street lights and 42 intersections with traffic lights.

✦ Sewer lines under the city snake along for 455 miles.

✦ There were 259 residential building permits issued. During 2006, at the height of the building boom, the total was 3,501. Permits for commercial construction hit 63, far below the 339 during the 2006 boom year.

✦ The city has a general depreciation schedule, showing that on average buildings are expected to have useful lives of 40 years, sewer systems from 20 to 50 years, street lights at 20 years, landscaping for about 15 years, vehicles from three to 15 years and equipment from five to 10 years. During the economic crunch, the city has been squeezing more life out of assets such as vehicles and heavy equipment.

✦ The city has a low-income home loans program in cooperation with state and national agencies. At June 30, 2012, there were 60 of these loans outstanding, totaling $516,575.

✦ The city sewage treatment plant handled an average of 4.5 million gallons per day.

✦ Workers collected 19.6 tons of residential trash. Another 60.7 tons of solid waste was collected at the city landfill.

✦ An average of 49.2 pounds of recyclable material was picked up from households.

The announcement said instructors in a variety of classes areas are being sought, along with recreation leaders, instructors and aides, a site director, head lifeguard, lifeguard I and II, swim lesson instructor, swim team coach, pool manager, assistant pool manager, and cashier.

You’ll find Thursday night’s agenda package at http://www.casagrandeaz.gov/web/guest/pcagenda. Clicking on DSA-13-00004 (in red) will bring up the full staff report, including the present ordinance and the proposed changes.

On the face of it, it’s a small change. But it will simplify how handicapped parking spaces in Casa Grande are marked and will eventually help the Police Department in enforcement actions.

As explained Thursday night to the Planning and Zoning Commission, a survey by the Police Department found a variety of handicapped parking signs, many of which do not comply with the current city code.

Ironically, it was also found that the present city code requirements to not comply with standards of the Americans With Disabilities Act.

Many of the signs in the city do not contain all of that, especially the references to reserved parking and the city code section, leading to the proposed changes for simplification, Tice told the commission.

The height requirement will also be changed.

Tice said that as the Police Department began evaluating its ability to enforce handicapped parking at both private and public areas, “what they found was that there’s a pretty good variety of different kinds of signage actually being used out in the community, much of which did not comply with our current signage requirements. So in simplifying our code, we bring a lot more of those existing signs into compliance.”

The commission unanimously decided to send a favorable recommendation to the City Council on the proposed changes.

“The other thing that will probably accompany this code when it goes to the City Council is a change in the code having to do with the parking enforcements,” Tice said.

“That’s not something under the Planning Commission’s jurisdiction or mine, but it’s a parking enforcement code which will likely modify the enforcement of the handicapped parking rules, authorize the Police Department to enforce people illegally parking, if you will, in handicapped parking areas within private property as well as within the public right of way.”

Chairman Norman Sam asked if the proposed changes will make it more difficult to enforce the regulations.

Tice also said that if the council approves the proposed parking changes, “there would be very few that are out of compliance, because all of them at least have the blue handicapped symbol, which is what this code requires. There may be a few that don’t have the space painted correctly or the sign applied correctly, but it’ll be a much smaller number than we have today.”

In other action Thursday night, the commission approved a conditional use permit for a mobile home to be used as a caretaker’s residence at the Ed Hooper Rodeo Grounds at Pinal Avenue and Rodeo Road.

As Seeds of Hope Executive Director Mark Vanderheyden, blue shirt, and board members watch, Casa Grande Mayor Bob Jackson cuts the ribbon Wednesday, Feb. 6, to dedicate the organization?s Mondo Anaya Community Center. You can find out about the center and other Seeds programs and activities at http://www.seedsofhopeaz.com 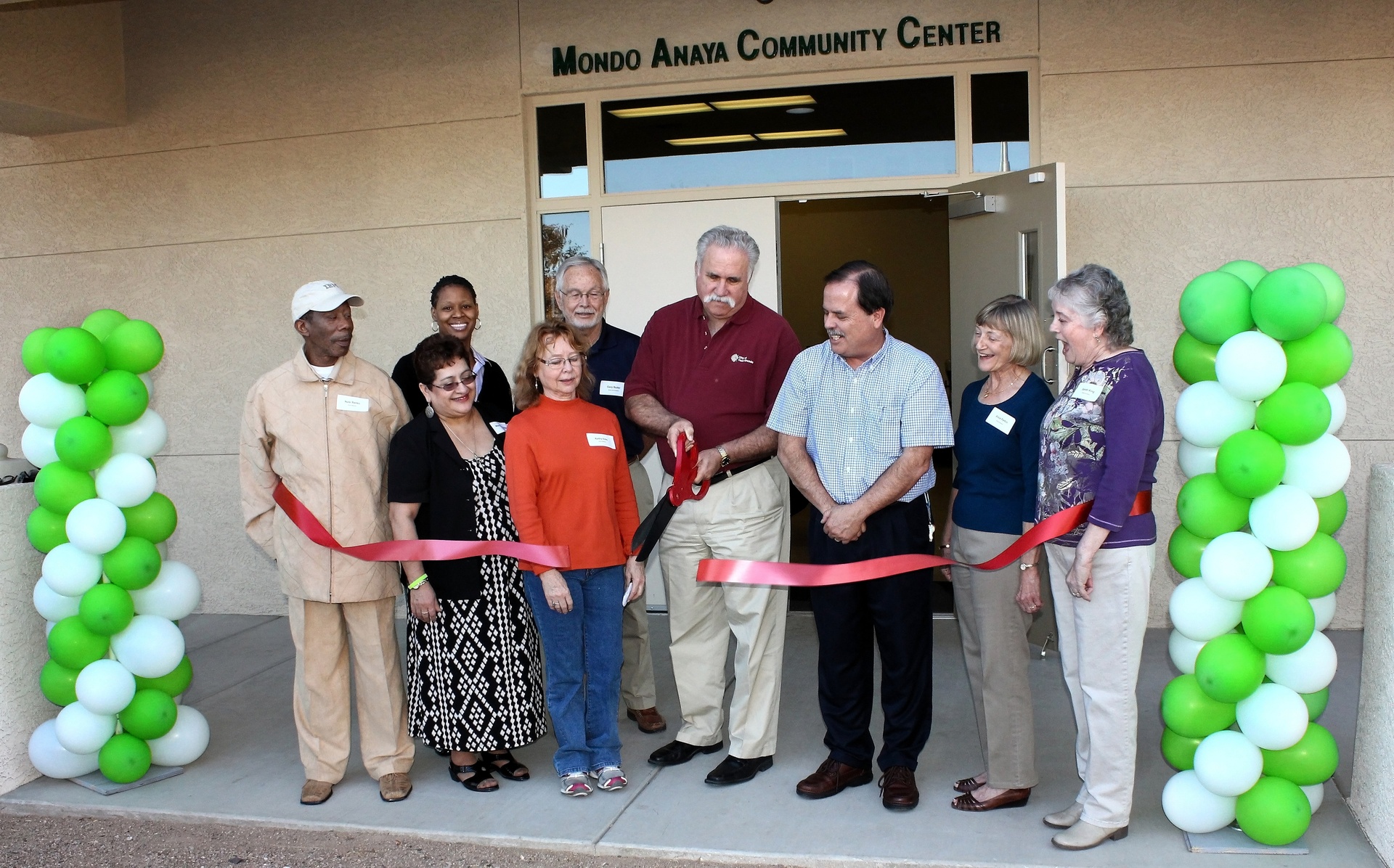 Work is progressing on remodeling of both the downtown library and the former Police Department headquarters, the City Council was told Monday night.

With the construction of a new Public Safety Facility on the north end of the city, the old police headquarters on Marshall Street was to become an enlarged communications center and a downtown substation.

“A floor plan has now been developed and they just completed the asbestos survey,” Councilwoman Mary Kortsen told the other council members. “It wasn’t a surprise they did find some, but it doesn’t seem to be a serious problem.

“The next step is going to be to evaluate interior design options, begin construction document development and then develop a guaranteed maximum price (for construction) proposal. That proposal is always a very important, because we have to keep it within budget.”

The city has moved more and more toward guaranteed maximum price contracts for municipal construction projects, under which the contractor guarantees a certain price. If there is a cost runover, the contractor pays the difference.

Work toward remodeling the library on Drylake Street has “been kind of a challenge,” Kortsen said. “It seemed like we had enough funds to do certain things, but we’ve cut back on that.

“People worked very, very hard on it, what our community needs. And that they now have a floor plan also that hopefully will meet our needs for the time being and some flexibility for the future.

“More than likely, we’re going to be looking again at doing something with the library. We’re trying to do with what we had as far as the money. And so the next step is going to be to evaluate the interior design options, begin construction document development and then develop a guaranteed maximum price proposal.”

The city announced the two upgrade projects in June of last year, with the council approving spending $177,275 for initial assessment of the library and $188,525 for assessing the old police building. At that time, the library project was estimated at $2 million, with the old police station at $1.5 million. No completion estimates were given.

Working out an agreement with the state to accept a major grant for additional work at the Casa Grande city airport was approved Monday night by the City Council.

The work on rehabilitating parallel taxiway A with an overlay and pavement markings is expected to cost $455,069. The city will pay $45,507, or 10 percent, with the rest coming from the Arizona Department of Transportation.

“Basically, ADOT has become very proactive in terms of their pavement management program,” Deputy Public Works Director Greg Smith told the council. “This year, the runway and connecting taxiways were part of their rehabilitation program.”

In the past, ADOT has fronted all the construction money. That has now changed, requiring cities to put up their 10 percent in advance.

“Not that that was our fault, but some communities didn’t pay their 10 percent after ADOT went ahead and put in the money,” Smith said, “so now the program requires that we push the money in initially.

“But it’s a good deal, it’s helping keep our airport viable and part of the economic fabric of the community.”

According to the staff report accompanying the agenda item, “This work would greatly extend the life of the parallel taxiway and help minimize future safety concerns due to pavement conditions. Such maintenance work is extremely crucial for the economic viability of the airport.”

If you’re downtown during the late hours on Friday, you’ll find a detour on Third Street between Marshall and Picacho streets from about 8:30 p.m. until 12:30 a.m. Saturday.

It’s for a Valentine’s Dance being held by AA Miracle House.

In other action Monday night, the council:

✦ Approved filing quit claim deeds to five parcels in the Casa Grande Links used for drainage, open space and landscaping. The city will retain the landscaping area between the subdivision and the city golf course.

✦ Approved an amendment to an agreement with the Arizona Department of Transportation on paying the costs of traffic signals, lighting, pedestrian flashing beacons and other equipment at intersections of city streets with a state highway. In this case, the city will now pay the monthly cost, about $200, at the intersections of Pinal Avenue and W. Havasupai Drive and Pinal Avenue at the San Carlos Trail.